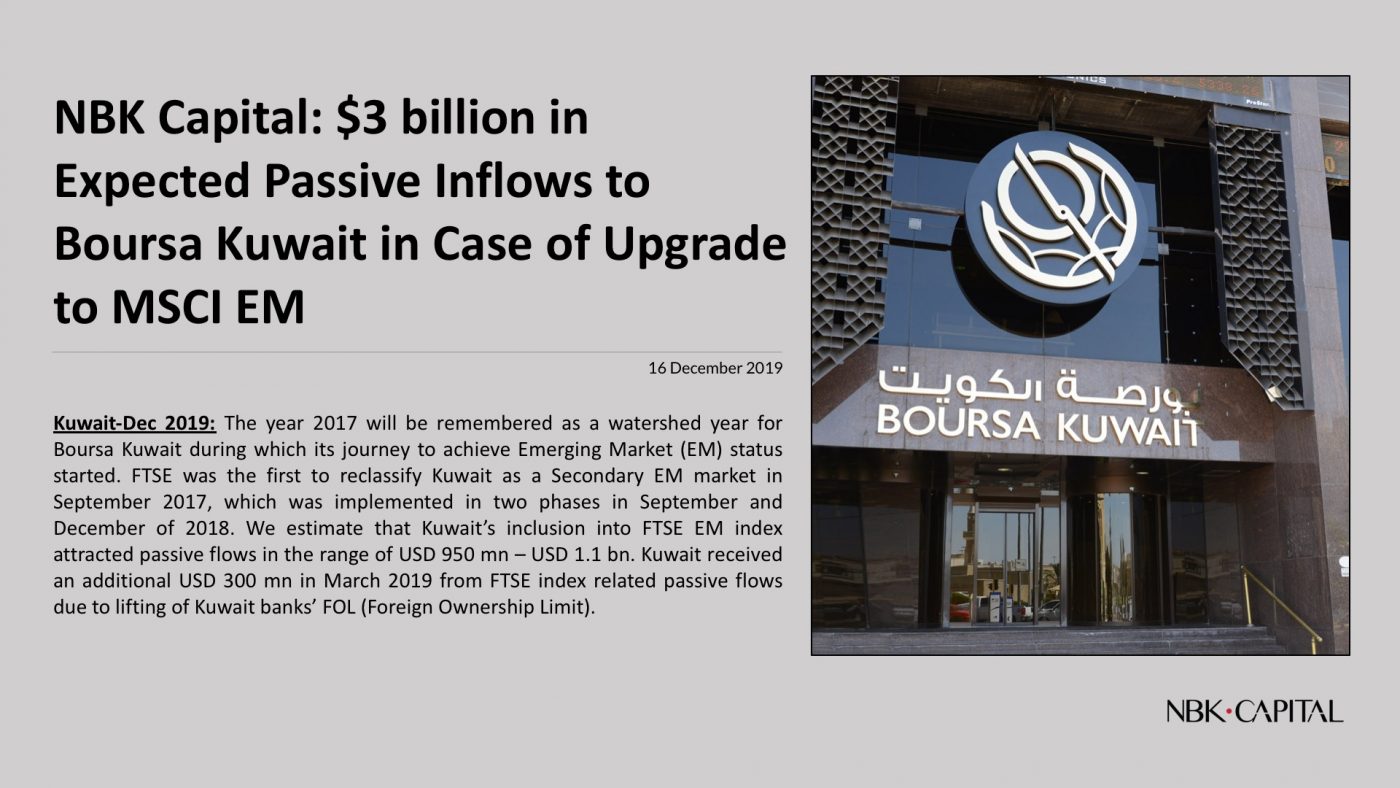 Kuwait-Dec 2019: The year 2017 will be remembered as a watershed year for Boursa Kuwait during which its journey to achieve Emerging Market (EM) status started. FTSE was the first to reclassify Kuwait as a Secondary EM market in September 2017, which was implemented in two phases in September and December of 2018. We estimate that Kuwait’s inclusion into FTSE EM index attracted passive flows in the range of USD 950 mn – USD 1.1 bn. Kuwait received an additional USD 300 mn in March 2019 from FTSE index related passive flows due to lifting of Kuwait banks’ FOL (Foreign Ownership Limit).
Following FTSE’s EM inclusion, S&P Dow Jones EM announced its intent to upgrade Kuwait in December 2018, adding Kuwait to its Global Benchmark Indices with an EM classification in September 2019. Finally, in June 2019, MSCI decided to conditionally reclassify Kuwait to EM. The reclassification was subject to fulfilling two criteria before November 2019 (more on this in a following section).

MSCI will make a final decision before 31 December 2019. As per recent announcements, CMA in cooperation with Boursa Kuwait and Kuwait Clearing Company have made notable progress in fulfilling both requirements ahead of the specified time period. In case of a positive announcement from MSCI in December, Kuwait will be added to MSCI EM index during the May 2020 semi-annual index review. Kuwait’s weight in the MSCI EM index is likely to be around 0.60% – 0.64% resulting in expected passive inflows of around USD 3 bn.

Kuwait is the latest GCC market to join the EM club, following Qatar, UAE, and Saudi Arabia. All else equal, an upgrade to EM status is generally associated with attracting greater foreign flows, which could result in an overall improvement in liquidity. A market upgrade also diversifies the investor base, increases the attractiveness of the country’s capital markets, and improves the overall transparency and corporate governance.

Developments since Conditional Upgrade in June 2019

The decision came as a surprise to market participants, as Omnibus structures are not available in any other GCC markets classified as EM and same NIN crossing for international investors was introduced by Saudi Arabia only after it was upgraded to EM status in June 2018. It remains unclear why MSCI is applying a higher standard for Kuwait in terms of market preparedness.
Nonetheless, in Oct. 2019, the Kuwait Capital Market Authority (CMA) announced that it issued resolutions, amending some provisions of the executive bylaws and rules related to implementation of omnibus accounts and same (NIN) crossing for international investors. On 12 November 2019, MSCI announced that it was seeking feedback from market participants until 29 November 2019 on new resolutions / amendments as mentioned earlier.

In case of a positive announcement from MSCI in December, Kuwait’s weight in the MSCI EM index is likely to be around 0.60%, and is expected to result in passive inflows of around USD 3 bn. This will be significantly higher than the USD 1 bn or so of passive inflows from the FTSE EM upgrade event. We also estimate the potential upgrade would result in additional active flows in addition to the passive flows. The updated provisional list for MSCI standard index comprises of seven constituents. 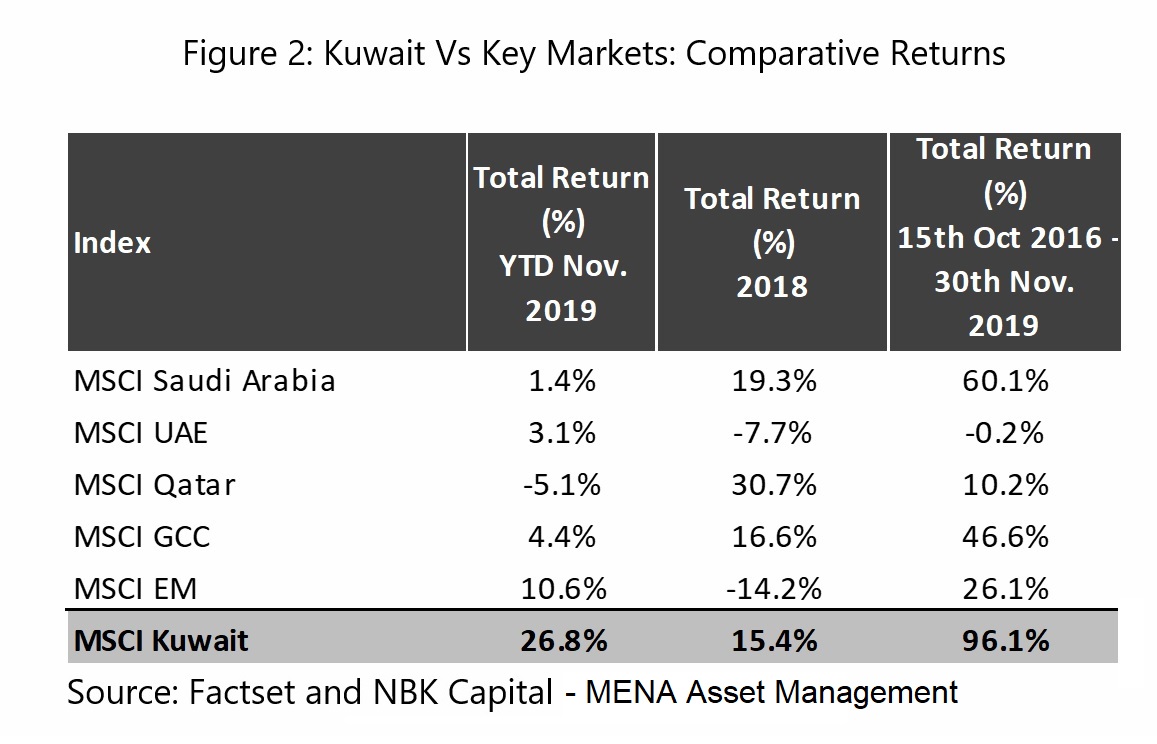 Impact on the Market So Far

The impact of the MSCI upgrade process on the Kuwaiti market can be clearly observed through the increased traded values, foreign flows, and the performance that the market has witnessed so far this year. On traded values, the Kuwaiti market has traded in excess of USD 22 bn till end of October 2019, which is almost double that of the same period last year. Net foreign flows increased significantly this year to USD 1.74 bn till October 2019, more than triple the flows received during the same period last year. Even adjusted for the USD 300 mn or so of passive inflows triggered by the increase in FOL for banks in March, this remains the highest net foreign flow figure on record (Boursa Kuwait’s data goes back to 2008). On performance, Kuwait continues its strong performance YTD until end of November and the MSCI Kuwait index is up 26.8% compared to 4.4% for the MSCI GCC Index and 10.6% for the MSCI EM Index. We believe the anticipation of a positive announcement from MSCI regarding the upgrade is in part a driver for the outperformance of Kuwait this year, in addition to solid results from certain sectors such as banking. 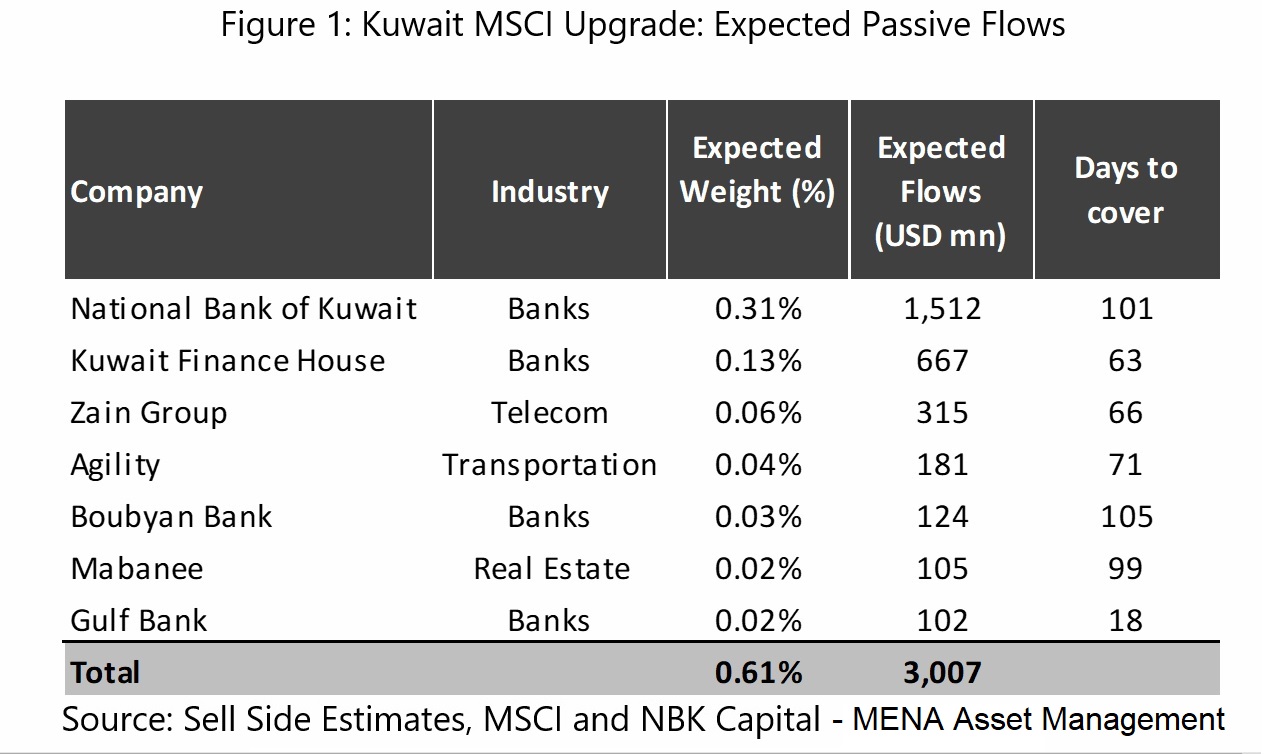 We remain constructive on MSCI’s final decision in December considering the promptness shown by CMA and Boursa in effecting the necessary changes required by MSCI, and also for successfully executing a slew of structural initiatives which were critical to Kuwait’s ascend to EM status.

From a structural perspective, we are also very excited about the reforms that are taking place in Kuwait to open up the market further, and adopting global best practices when it comes to market regulations. The reform process initiated by both CMA and Boursa Kuwait is creating a more robust trading platform. Moreover, this will lead to a better functioning of the market, and is at the heart of the push to upgrade Kuwait to EM status.