Corona virus eradicates market gains since the beginning of the year

The last week of February was a historic week for US and global markets as fears of the coronavirus spread and its effect on financial markets and the global economy were the central focus of investors. US indices declined by as much as 12.8% for the S&P 500 and 14% for the Dow Jones during the last week of February making it the worst weekly decline since 2008, while volatility surged as the VIX reached a high 49.48 before closing the week at 40.11. The MSCI AC World index closed the month of February down 8.2% after declining by 11.6% during the last 10 days of the month when the global virus-induced market rout intensified. The MSCI EAFI, on the other hand, which represents the performance of developed markets outside of the US and Canada, declined by 9.2% for the month, bringing its year-to-date losses to 11.2%.

In the US, the market sell-off intensified during the last week of February erasing most of the gains recorded since the middle of the previous year. Major US indices closed deep in the red with the S&P 500 down 8.4% for the month, and the Down Jones Industrial Average and the Tech-heavy Nasdaq down 10.1% and 6.4% respectively. Treasury yields, on the other hand, sunk to all-time lows with the yield on the 10-year treasury bonds falling to 1.127% as at the end of February.

Fears of a global economic slowdown caused by the spread of the virus has crippled world markets and has increased speculation that the US Federal Reserve would slash rates by up to 50 bps in one or two cuts in its upcoming March and April meetings, with some analysts even estimating that the Fed might call for an emergency meeting to cut rates. In a rare statement, the Fed Chairman Powell, said on Friday that the federal reserve would “use our tools and act as appropriate to support the economy”. The second estimate of the US Gross Domestic Product for the fourth quarter of 2019 showed an annual growth of 2.1%, consistent with the advance estimate and the growth rate for the third quarter. Inflation remained muted as the Personal Consumption Expenditures (PCE) for January increased to 1.7% y-o-y from a revised 1.5% in December, while the Core measure of PCE inched higher to 1.6% in January compared to 1.5% for the previous month.

Economic activity in the European Union remains weak; revised estimates for the fourth quarter European GDP showed a growth of 0.9% year-on-year, down from a revised 1.2% for Q3. Manufacturing activity, on the other hand, continues to improve as the Markit Manufacturing PMI climbed to 49.1 in February according to preliminary estimates up from 47.9 in December and 46.3 in November. European financial markets joined the global rout and declined steeply during the month in tandem with their global peers. The Stoxx Europe 600 was down 8.5% in February, while the German DAX and French CAC40 declined by 8.4% and 8.5% respectively resulting in losses of 10.3% and 11.2% for the two indices since the beginning of the year. 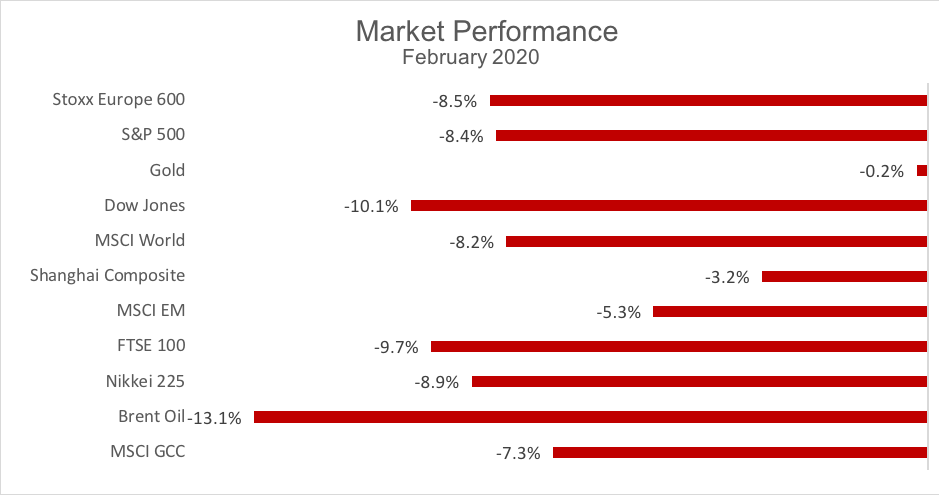 In the UK, the FTSE 100 retreated by 9.7% in February, accumulating losses of 12.8% since the beginning of the year. Manufacturing activity continued its recovery through the second month of the year; the Markit Manufacturing PMI jumped to 51.9 in February, up from 49.7 In January. Inflation also ticked higher with the headline and core measures of CPI increasing to 1.8% and 1.6% in January up from 1.3% and 1.4% respectively in December.

The decline in Emerging markets wasn’t as severe as it was in their developed peers as emerging markets had already underperformed in January. The MSCI EM Index declined by 5.3% in February after having lost 4.69% during January, bringing its total year-to-date decline to around 9.8% which is in-line with global equity indices. Among the biggest losers in emerging markets were the Borsa Istanbul 100 Index and the Russian Stock Exchange which declined by 11.0% and 9.5% respectively in February. Declines in other Asian markets were generally moderate compared to other markets. The MSCI Asia ex-Japan retreated by 2.9% outperforming both Emerging and developed markets peers. The Shanghai composite recorded a decline of 3.2%, while the Taiwan Stock exchange declined by 1.8%. Elsewhere, India’s Nifty 50 closed in the red at 6.4%, while the Brazilian Ibovespa and Mexico Exchange Indices declined by 8.4% and 6.3% for the month.

In the Gulf, equity markets recorded broad declines with the exception of Bahrain and Oman. The S&P GCC Composite Index retreated by 7.24% during February bringing its total year-to-date losses to 8.69%, while the broader S&P Pan Arab Index declined by 6.96% accumulating losses of 7.66% since the beginning of the year. Leading the declines was the Qatari market with a loss of 9.12% for the Qatar Exchange Index. It was followed by the Saudi Tadawul All Share index which declined by 7.50% for the month. It was followed by Dubai’s DFM General Index and Abu Dhabi’s ADX General Index retreating by 7.18% and 4.94% respectively. In Kuwait, declines were more moderate with the Boursa Kuwait All Share Index down 4.0% for the month and the Premier Market Index down 4.31%. Oman and Bahrain were the only positive market in the GCC with Oman’s MSM 30 Index up 1.27% improving its year-to-date gains to 3.76% and Bahrain’s All Share index marginally in the green with a gain of 0.17% in February and 3.12% for the year. Elsewhere in the Middle East, Egypt’s EGX 30 declined by 6.54% while Morocco’s MADEX and Jordan ASE Index declined by 2.19% and 1.71% respectively.