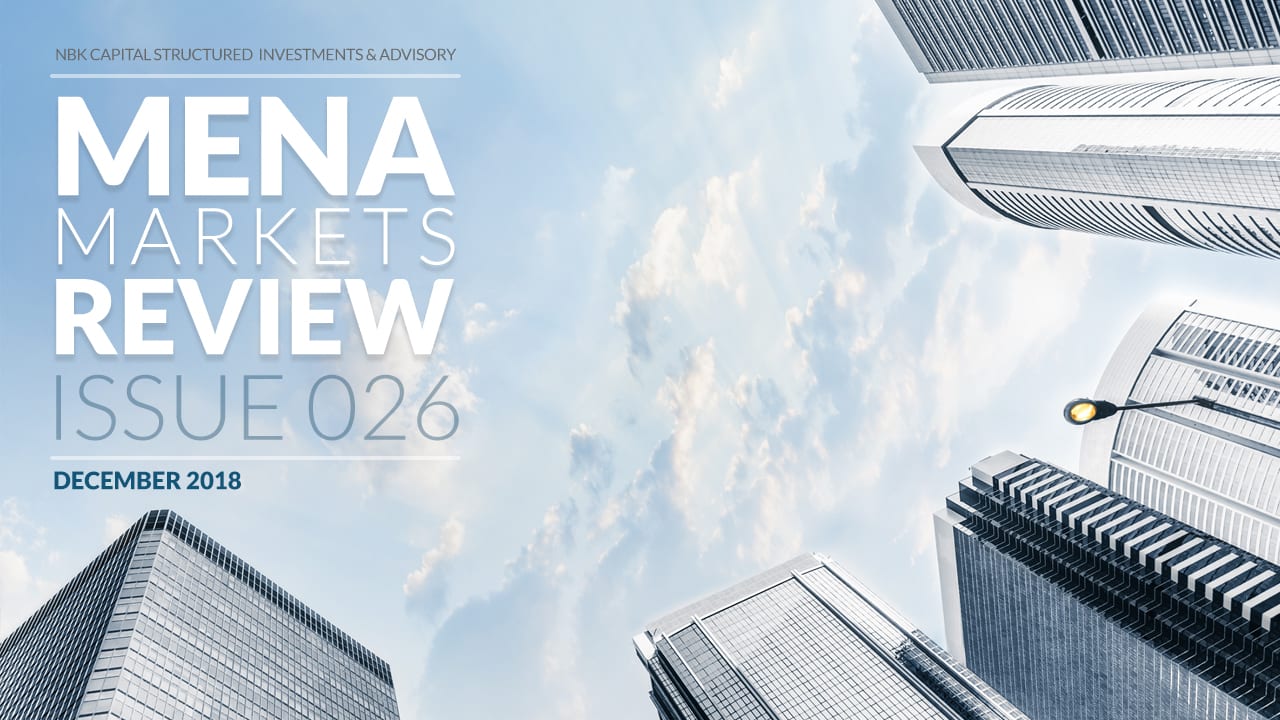 Oil rebounded off the year lows supported by declining OPEC production in December. Brent had retreated by 35% in Q4 2018 and 20% for 2018.

DECEMBER FED RATE HIKE TO BE FOLLOWED BY A PAUSE

As widely expected, the Federal Reserve hiked interest rates by 25 bps at its December meeting, the fourth increase of the year and leaving the target rate range at 2.25-2.50%. Although the Fed revised down its forecasts for growth and inflation and its guidance for rate hikes in 2019 to two from three, it also announced no change to its plans to slow or reverse its program of bond sales (‘quantitative tightening’). Financial markets interpreted this as hawkish, triggering a sharp sell-off in equities. The Fed’s outlook is still at odds with the consensus view on rates: futures markets are now pricing in just a 5% chance of a rate hike in 2019 – a much less aggressive view on policy tightening than a few weeks ago. Comments by Fed chairman Jay Powell in early January however suggest that the bank may be moving in a dovish direction.

GDP growth for 3Q18 was revised down a touch to 3.4% from 3.5% on fractionally softer (though still strong) consumer spending, but still supported by a decent inventory build. The news flow over the past month has been dominated by downside risks, fueling concerns of a slowdown in 2019. These include the plunge in equity prices and impact of tighter Fed policy, the absence of a resolution of the trade war with China, and from December 22nd the partial government shutdown due a row between President Trump and Congress over funding for the proposed border wall with Mexico. The latter has persisted into 2019 and affected some 800,000 federal employees. Although the direct economic impact of the shutdown is not expected to be large, it underscores fears over policy deadlock and confrontation as the Democrats took control of the House of Representatives in early January.

High frequency economic data has generally reinforced the view that growth continues to soften albeit from very robust levels. The composite PMI edged down to 53.6 in December from 54.4 in November but remains firmly in growth territory. However, there was a major surprise in the December labor market data, with employment smashing through expectations to rise 312,000 and its largest climb since February, while wage growth accelerated to 3.2%. The Atlanta Fed ‘nowcast’ estimates growth at 2.7% in 4Q18, which if achieved would leave full-year 2018 growth at 2.9% – the highest since 2015. The Fed’s revised forecasts put growth at 2.3% in 2019.

Meanwhile inflation rates have continued to come down, mostly reflecting the impact of the recent fall in oil prices on gasoline costs. Personal Consumption Expenditure (PCE) inflation hit an 11-month low of 1.8% in November, though ‘core’ inflation edged up slightly to 1.9%. There is still little sign of recent tariff measures filtering through to consumer prices, but this could change if tariffs on imports from China are increased from 10% to 25% in March when the current truce expires.

Economic conditions in the Eurozone continued to soften in December. The regional PMI fell to 51.3, its lowest pace of expansion in four years, as political turmoil and trade uncertainty weighed on manufacturing and services activity. The decline was led by a board contraction in France following weeks of street protests. Global trade uncertainty also continued to negatively impact Germany’s export sector and business confidence. Wages in the Eurozone however, grew at their fastest pace since the financial crisis, climbing 2.4% in 3Q18, reflecting still tightening labor markets.

The European Central Bank confirmed the end of its asset purchase program in December but reaffirmed its intention to keep interest rates at their current level “at least through summer of 2019” and adjusted its guidance on the re-investment of proceeds from maturing bonds, which will be maintained well beyond the first rate hike and for as long as necessary. Meanwhile, it lowered its projections for both growth and inflation for 2019 by 0.1% to 1.7% and 1.6% respectively, while 2020 projections were unchanged.

Several weeks of street protests in France over levies on petrol and heating oil saw President Macron scrap environmental tax plans from the 2019 budget. He also announced a package to boost low income households. These measures will push the budget deficit above of 3% of GDP in 2019 but are expected to be temporary as the President still seeks to follow through with his reform agenda. Although the increase in French deficit spending reinforced the resolve of Italy’s populist coalition government in its budget battle with the EU, the weakening Italian economy has forced it to backtrack, avoiding a deeper clash with Brussels. The government will now target a deficit of 2.0% of GDP compared to the previous 2.4%. Italian GDP fell 0.1 q/q in 3Q18 on softer domestic demand, while the manufacturing PMI was below 50 in December.

In the UK, tensions over Brexit continue with Prime Minister Theresa May forced in December to pull the parliamentary vote on her negotiated withdrawal agreement with the EU facing heavy defeat. The vote was postponed until mid-January, with May looking to secure further concessions from the EU before then to help secure a still-improbable win. If the deal is not passed, the prospect of the UK leaving the EU without a deal in March and facing a lengthy period of economic and financial disruption will loom closer.