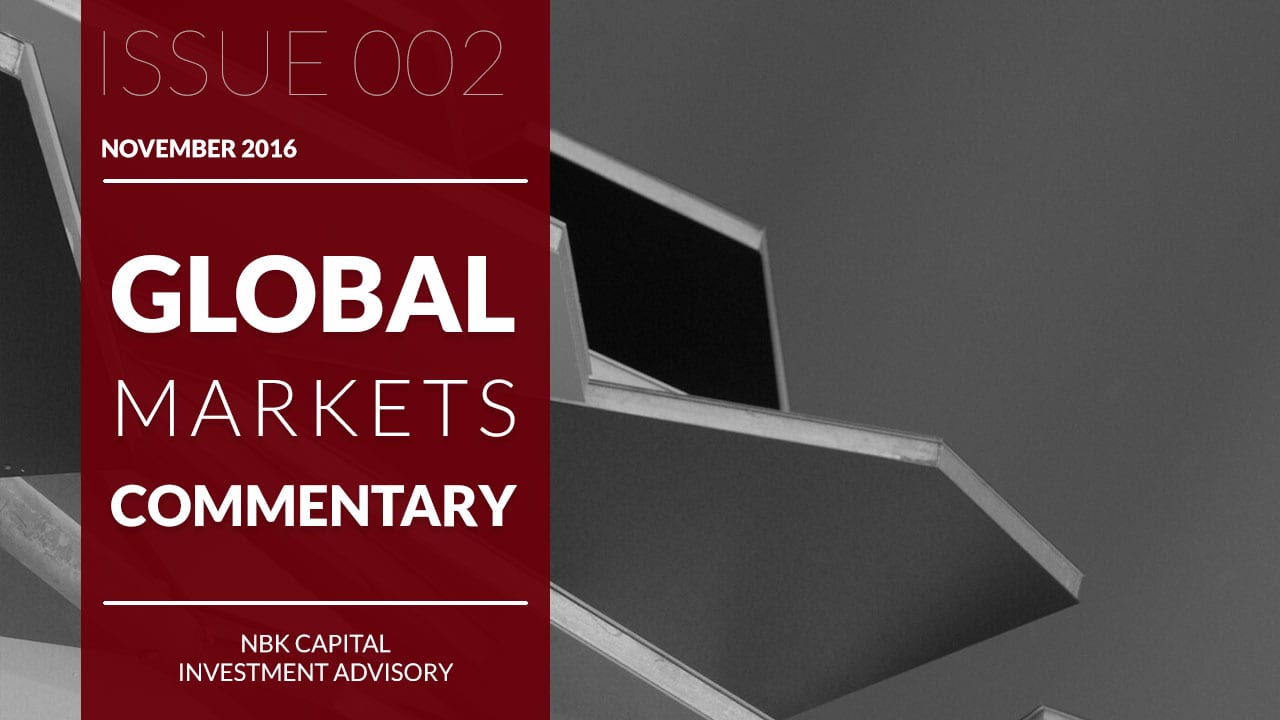 The US economy appears to show signs of continued growth, with preliminary annualized Q3GDP coming in at 3.2% supported by improving retail sales and a strong housing market

Overall, global equities had mixed performance with Japan and U.S. leading while emerging markets and UK equities were the major lagers. US equities rallied, following poor performance back in October, gaining 3.7% as measured by the S&P 500, as a result of Trump’s victory, which is expected to lead to tax cuts and infrastructure spending. Commodities were mixed for the month with Gold down 8.1% while Brent Oil is up 4.5%. OPEC’s decision in its meeting on November 30 in Vienna, to cut production levels for the first time in eight years, has driven crude oil prices up by 8.8% in the last day of trading of the month.

The US economy appears to show signs of continued growth, with preliminary annualized Q3GDP coming in at 3.2% supported by improving retail sales and a strong housing market. With the consumer price index coming in at 1.6% YoY, boosted by rising energy prices, and the expected increase in government spending from the Trump Administration, this could support the Fed’s case for a December rate hike.

The November US ISM manufacturing came in at 53.2, higher than October’s reading of 51.9. The November Nonfarm Payroll came in at 178,000, significantly higher than the October reading of 142,000. US unemployment improved to 4.6% in November versus 4.9% in October. Consumer confidence grew in November to 107.1 from 100.8 in October. Durable goods order came in higher than expected at 4.8% in October, due to a 12% gain in transportation orders, compared to the revised September figure 0.4%. Strong US housing data revealed housing starts improved 25.5% in October to an annualized rate of 1.323 million, marking the strongest monthly percentage gain since 1982. Existing home sales also picked up to 5.60 million while new homes sales dropped to 0.563 million in October on an annualized rate.

The GCC equity market continued to perform well ending the month of November with gains of 7.8%, supported by Saudi equity market, which increased 16.4%

The UK Manufacturing Purchasing Managers Index (PMI) for November dropped slightly to 53.4 compared to 54.2 in October. UK inflation remains somewhat stable at 0.9% down from 1.0% in September. Unemployment fell to 4.8%, an 11-year low as the number of unemployment claims only rose 10,000 to 803,000. Consumers continue to be confident which is proving to be crucial to the UK economy; retail sales rose to 7.4% YoY in October, up from the revised 4.2% in September.

UK equities dropped 2.5% in November as measured by the FTSE 100.

The Eurozone manufacturing sector continues to grow as evident in the preliminary manufacturing PMI of 54.1 for the month of November, up from 53.5 in October. Further supporting growth in the region, is the preliminary service PMI for November, also at 54.1 compared to 52.8 in October. Consumer confidence, although still negative, has improved from a reading of -8.0 in October to a reading of -6.1 in November.
European equities in November gained 0.9%, as measured by the Stoxx Europe 600.

Japan posted, a trade surplus of JPY 496 billion in October, compared to JPY 498 billion in September. The surplus was driven by a continued decline in the value of imports, which has fallen faster than exports. The Nikkei Manufacturing PMI remains slightly above 50 at 51.3 compared to 51.4 in the previous month. Japan’s CPI rose YoY 0.1% in October breaking the declining trend over the past seven months. The unemployment rate remains at 3% in October, unchanged from September, the lowest since 1995; however, Real GDP grew at a rate of 0.5% QoQ in Q3.

Japanese equities continue to perform considerably well, as measured by the Nikkei 225, generating returns of 5.1% in November.

Chinese exports dropped 7.3% in October, an improvement from the 10% decline in September and imports declined by 1.4% YoY. CPI increased, on a YoY basis, from 1.9% in September to 2.1% in October. The Caixin Manufacturing PMI dropped to 50.9 in November compared to 51.2 in October.

Although emerging market equities ended the month down 4.7%, Chinese equities, as measured by the Shanghai Stock Exchange Composite Index, generated returns of 4.8%.

The GCC equity market continued to perform well ending the month of November with gains of 7.8%, supported by Saudi equity market, which increased 16.4%. In addition, UAE equities, Dubai and Abu Dhabi, recovered from last month posting minor gains of 0.9% and 0.2%, respectively. The gains in Saudi stocks were supported by delayed payments finally being made to contractors amounting to SR40 billion and the announcement that another SR100 billion will be paid out by the end of December. Abu Dhabi’s improved performance this month comes from speculation of future mergers within the financial industry given the recent completed merger between First Gulf Bank and National Bank of Abu Dhabi.