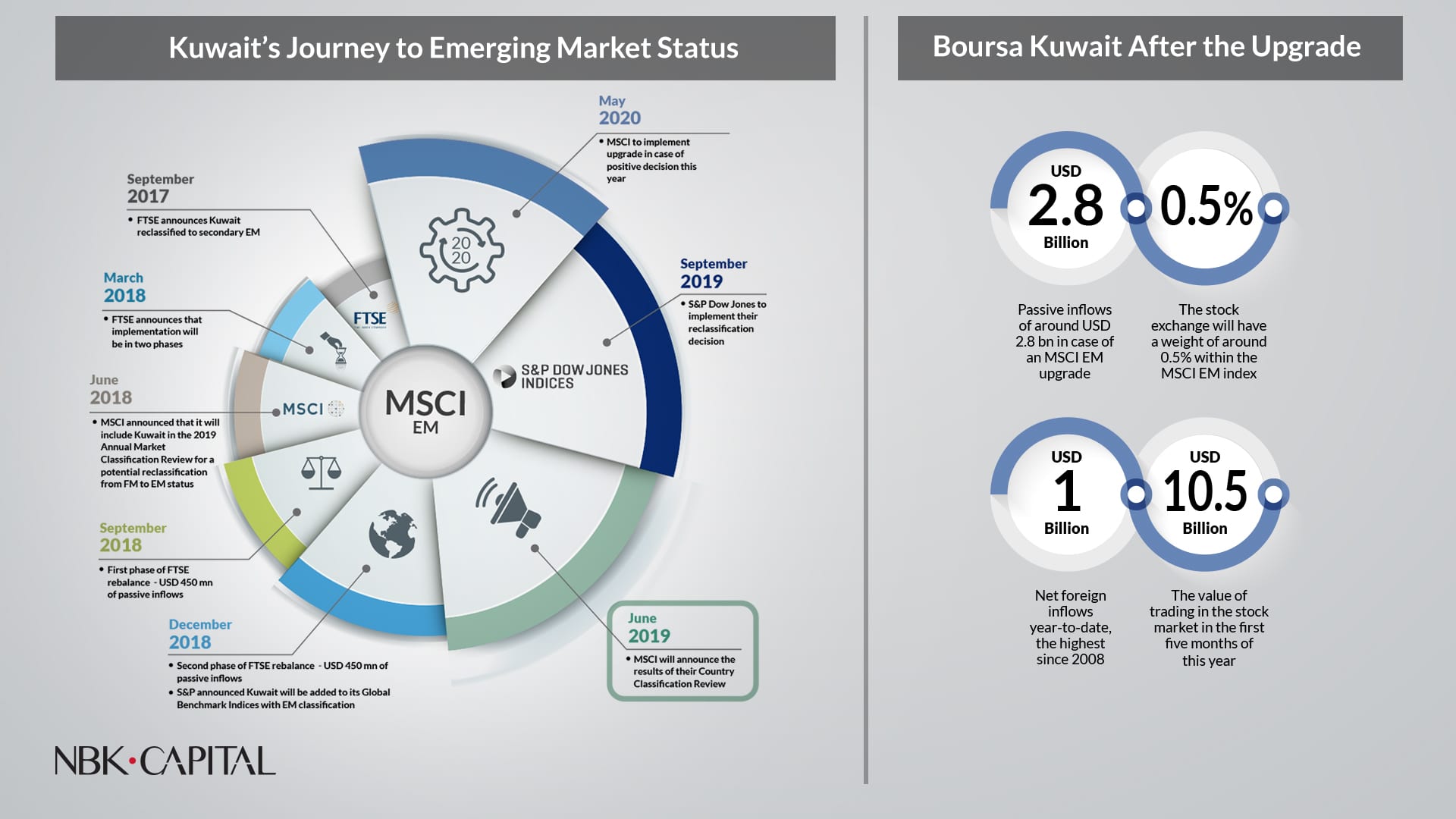 Kuwait-June 2019: In September 2017, FTSE reclassified Kuwait as a secondary emerging market (EM). This kicked off Kuwait’s journey towards ascending to EM status. The implementation of the FTSE upgrade in 2018 (over two phases) attracted around USD 950 mn of passive flows into the Kuwaiti market. Also, in another step towards EM status, S&P Dow Jones announced that Kuwait’s stock market will be added to its Global Benchmark Indices with an EM classification, a move that would be effective this September. Finally, a potential upgrade to EM status by MSCI is in the cards that would cement Kuwait’s EM status. Kuwait’s weight in the index will likely be at 0.5% and result in passive inflows of around USD 2.8 bn. The upgrade in status will lead to an improvement in market dynamics and the resulting inflows will undoubtedly be a boon, making it a highly anticipated event that we will explore in more detail in this report.

In June 2018, MSCI announced it would be adding Kuwait to its EM watch list. This will qualify it to be included in the 2019 Annual Market Classification Review for a potential reclassification from Frontier Market (FM) to EM status, the result of which will be announced on the 25th of June.

MSCI had highlighted a number of positive market reform initiatives taken by the CMA and Boursa Kuwait in areas like market entry, market regulations, clearing and settlement, and custody. We believe that Kuwait being added to the watch list is a step in the right direction. The final decision rests on the consultations that MSCI have launched in March this year and will be conducting with different stakeholders, including investors, brokers, and custodians. This process will be key in determining whether Kuwait is upgraded in 2019. Though chances of a positive outcome are high, it is still not a done deal. EM investors, who are primary stakeholders in the upgrade decision, had been kept busy over the previous months with multiple index events, not the least of which is Saudi Arabia’s EM upgrade that is currently underway. This could play to Kuwait’s disadvantage as investors could choose to take more time to study the market and the raft of reforms that have taken place recently. In case the decision to upgrade Kuwait to EM is not made in 2019, we believe that the chances of an upgrade in June 2020 will be significantly higher.

If the upgrade decision on June 25 is positive, actual implementation / inclusion is expected to start in May 2020. It is still not clear whether it will be implemented in a single tranche or split over two tranches. Foreign passive inflows usually hit the market around the implementation date, though, going by previous similar events, prepositioning by active investors in the market happens before the decision and implementation dates.

Expected foreign flows in case of an MSCI EM upgrade

Analysts expect passive inflows of around USD 2.8 bn in case of an MSCI EM upgrade, significantly higher than the USD 950 mn or so of passive inflows from the FTSE EM upgrade. Additionally, on top of the USD 500 bn or so of passive funds tracking them, the MSCI EM indices are used by actively managed funds with more than USD 1.5 tn in assets, which could lead to sizable active inflows on top of the passive ones. Unlike the passive flows, which are more or less automatic, the magnitude of the active foreign flows will depend on the attractiveness of the Kuwaiti market and the companies in an EM context. As such, liquidity, valuation, earnings growth, transparency, corporate governance practices will all be factors that will affect which companies will attract active investors. It is this incentive that will help our market improve more over time.

Impact on the market so far

The impact of the MSCI upgrade process can be mainly summarized in terms of the pick-up in traded values, foreign flows, and the performance that the market has seen this year. On traded values, the Kuwaiti market has traded in excess of USD 10.5 bn in the first five months of the year, which is almost a 170% increase over the same period last year. Net foreign flows grew significantly this year to USD 1 bn. Even adjusted for the USD 300 mn or so of passive inflows triggered by the increase in FOL (Foreign Ownership Limit) for banks in March, this remains the highest net foreign flow figure on record (Boursa Kuwait’s data goes back to 2008). On performance, Kuwait continues its strong performance YTD and the MSCI Kuwait index is up 26%. This compares to 16% and 14% increases for the respective GCC and World Indices. Kuwait’s outperformance relative to global markets is worth highlighting, as we cannot look at market performance in absolute terms but relative to other markets due to increased correlation between equity markets globally. We believe the anticipation of a positive announcement from MSCI regarding the upgrade is in part a driver for the outperformance of Kuwait this year, in addition to solid results from certain sectors such as banking.

Outlook on Kuwaiti equities for 2019

Just to put things into context, the market has had a very good run since the FTSE EM upgrade announcement in September 2017 to mid-June this year, rising almost 36% during this period. Therefore, it is important to keep that in mind when building expectations for future returns. Nonetheless, we still have a positive outlook on the Kuwaiti stock market over the medium-term, as we believe it offers investors the right mix of fundamental attractiveness and fund flow related catalysts. We believe Kuwait is in a ‘sweet-spot’ from a macro perspective considering its comparatively low budget-breakeven level (one of the lowest in the GCC). This allows Kuwait to stay on course for executing its ambitious infrastructure-spending plan and maintain or potentially grow its sovereign wealth reserve. Kuwait’s robust infrastructure spending plan is likely to result in notable GDP growth over the medium-term as per IMF forecasts. This is likely to have a multiplier effect resulting in earnings growth across multiple sectors especially the banks, which are very well represented on Boursa Kuwait. Our fundamental case for Kuwait is further strengthened by the funds flow angle. Post the FTSE flows, the attention now shifts to the potential MSCI upgrade. As mentioned earlier, this is a significant event and with the right ingredients can attract foreign flows that are more sizable than what we saw during the FTSE EM implementation events.

From a structural perspective, we are also very excited about the reforms that are taking place in Kuwait to open up the market further and employ global best practices when it comes to rules and regulations that govern the market. The reform process initiated by both Boursa Kuwait and the CMA is creating a more robust platform that allows improved access, transparency, and accountability in the market. This will lead to a better functioning of the market and is at the heart of the push to upgrade Kuwait to EM status.