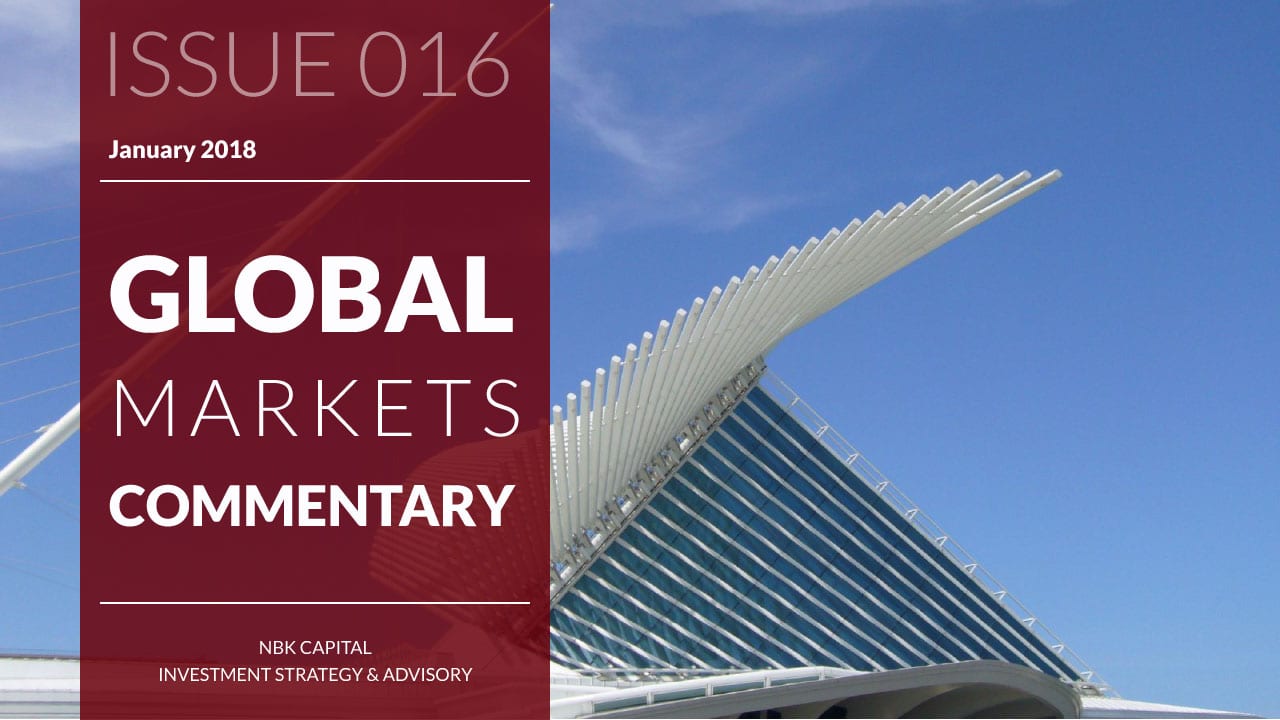 Global equities have kicked off 2018 with positive performance for the most part. The MSCI All Country World Index is up 5.6% in January. In the US, Congress was unable to agree on a budget for 2018 resulting in a federal government shut-down. This was short lived as Congress moved to extend the deadline to February 8, 2018 in an effort to find common ground. In Europe, Germany’s political parties have come to an agreement in terms of forming a framework government although a final vote within the Social Democratic Party is still pending. Also, bailout funds were released to Greece following its push of additional reforms as part of the bailout program. In Asia, the Bank of Japan left its monetary policy unchanged. In terms of commodities, Gold and Brent were each up 3.3% with Brent closing during the month above USD 70 pbl, its highest in almost four years.

In the US, the January Markit Manufacturing Purchasing Managers Index (PMI) came in at 55.5 climbing 0.4 from December’s number while the Services PMI held flat at 53.3 compared to December. Initial Jobless Claims dropped to 230,000 in its latest reading while the Unemployment Rate for January came in at 4.1% unchanged from December’s figure. Durable Goods Orders increased to 2.9% in December from 1.7% in November led by aircraft and vehicle orders. Housing Starts and Building Permits in December fell compared to November by 8.2% and 0.1%, respectively, while Retail Sales grew 0.4% month on month in December. Gross Domestic Product (GDP) for Q4 on a preliminary basis came in at 2.4%.

US equities in January performed positively with the S&P 500 and Dow Jones closing up 5.6% and 5.8%, respectively.

In the UK, the Markit Manufacturing PMI in January dropped compared to December although remained above 50 at 55.3. The Markit Services PMI in January came in at 53 decreasing 1.2 from December’s reading. The Consumer Price Index (CPI) in December increased by 0.4% when compared to the previous month while Retail Sales dropped 1.5% month on month compared to November. Consumer Confidence remains negative although has improved from December’s reading increasing from -13 to -9. GDP for Q4 on a preliminary basis came in at 0.5% slightly higher than Q3’s reading of 0.4%.

UK equities closed the first month of the year in the red, dropping 2.0% as measured by the FTSE 100
In Europe, the Markit Manufacturing PMI held constant at 59.6 from December’s reading while the Service PMI increased to 58 from December’s figure of 57.6. On a preliminary basis, the CPI year on year dropped from from 1.4% in December to 1.3% in January while Consumer Confidence held steady in January at 1.3. Retail Sales in December on a month on month basis contracted 1.1% after growing 1.5% in the previous month.
European equities in January closed up 1.6% as measured by the Stoxx Europe 600.

In Japan, month on month exports and imports in December grew by 9.3% and 14.9%, respectively. Both exports and imports grew in December by a rate lower than that registered in November. The CPI for December year on year increased by 1.0% surpassing November’s rate of 0.6%. Retail Trade month on month in December grew by 0.9% although was below November’s growth of 1.8%. The Consumer Confidence came in at 44.7 unchanged from December yet below expectations of 44.9.

Japanese equities posted positive performance of 1.5% as measured by the Nikkei 225.

In China, the trade balance for December was in a surplus at CNY 362 billion, an increase of 37% from the previous month. Imports and Exports for December year on year increased by 18.7% and 10.8%, respectively. Retail Sales for December on a year on year basis increased by 9.4% although came in below the previous month’s rate of 10.2%. The Caixin Manufacturing PMI for January was flat compared to December at 51.5 while the Services PMI increased to 54.7 compared to December’s 53.9. GDP for Q4 on a preliminary basis came in at 1.6% slightly lower than Q3’s reading of 1.7%.

The MSCI Emerging Market Index closed up 8.3% in January while the Shanghai SE Composite ended January in the green up 5.3%.