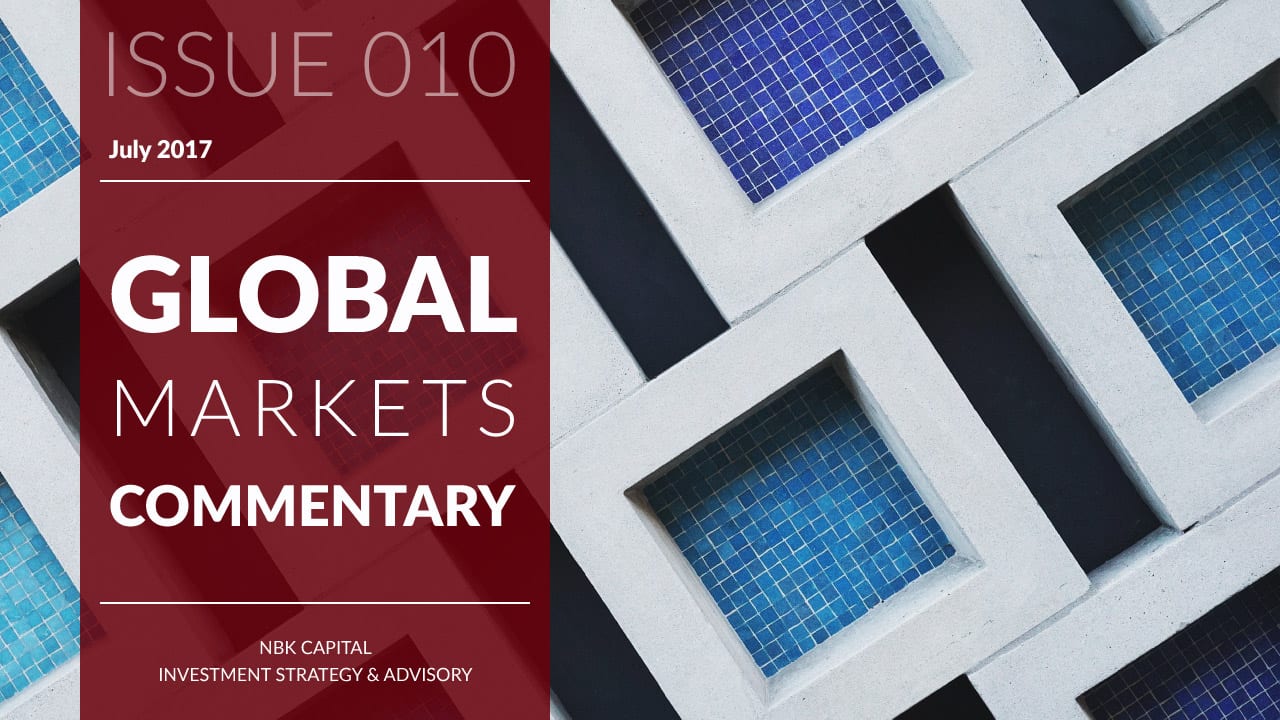 The MSCI All Country Index was up 2.7% with the MSCI Emerging Market Index posting a gain of 5.5%

In July, most global markets posted gains. The MSCI All Country Index was up 2.7% with the MSCI Emerging Market Index posting a gain of 5.5%. In the US, both major indices reached all-time highs with the Dow Jones and S&P 500 gaining 2.5% and 1.9%, respectively. The US continues to deal with political turmoil in Washington DC and Trump was unable to secure the necessary votes in the Congress to pass healthcare legislation. Across the Atlantic, Brexit remains a major issue with the UK and EU remaining at odds on several matters such as the financial settlement and rights of EU citizens residing in the UK. Mainland European equities, mainly the German DAX and French CAC 40 were down 1.7% and 0.5% respectively. On the commodity front, Gold has increased 2.2% while Brent increased 9.9% in July.

US Manufacturing and Services continue to hold above the 50 marker for the month of July on a preliminary basis. The US Markit Manufacturing PMI came in at 53.2 compared to last month’s 52 while the US Markit Services PMI was flat at 54.2. Initial Jobless Claims for July came in at 244,000 compared to the end of June reading of 250,000. Durable Goods Orders increased in June by 6.5% compared to the drop registered in May of -0.1%. Retail Sales in June continued to shrink by -0.2% on a month on month basis. Existing Home Sales in June dropped by 1.8% compared to the previous month while New Home Sales increased, albeit at a lower rate, for the month of June by 0.8%. Housing Starts and Building Permits increased month on month in June by 8.3% and 7.4%, respectively. Gross Domestic Product annualized for Q2 on a preliminary basis in line with expectations at 2.6%.

UK equities were slightly up, closing with a gain of 0.8%, as measured by the FTSE 100.

Chinese equities, as measured by the Shanghai Stock Exchange Composite Index, reported a gain of 2.5% in July

The Eurozone’s Markit Manufacturing PMI for July remains above 50 at 56.6 slightly dropping from June’s reading of 56.8. The preliminary reading of the Markit Services PMI held constant at 55.4. The Unemployment Rate across the zone decreased by 0.1% for a reading of 9.1% in June. Consumer Confidence in July came in at -1.7 compared to June’s figure of -1.3. Gross Domestic Product on a preliminary basis year on year for Q2 increased to 2.1% from the previous reading of 1.9%. Retail Sales for June on a month on month basis increased by 0.5% compared to May’s growth of 0.4%.

European equities declined in July by 0.4%, as measured by the Stoxx Europe 600.

Japan’s imports and exports year on year continue to rise growing in June by 15.5% and 9.7%, respectively, beating out expectations however slowing down from the previous reading in May. The Nikkei Manufacturing PMI for July came in at 52.1 versus 52.2 for the month of June. Housing Starts for June increased by 1.7% year on year increasing from -0.3% in May. Retail Trade on a month on month basis improved in June by 0.2% but came in below expectations of 0.4%.

Chinese equities, as measured by the Shanghai Stock Exchange Composite Index, reported a gain of 2.5% in July.