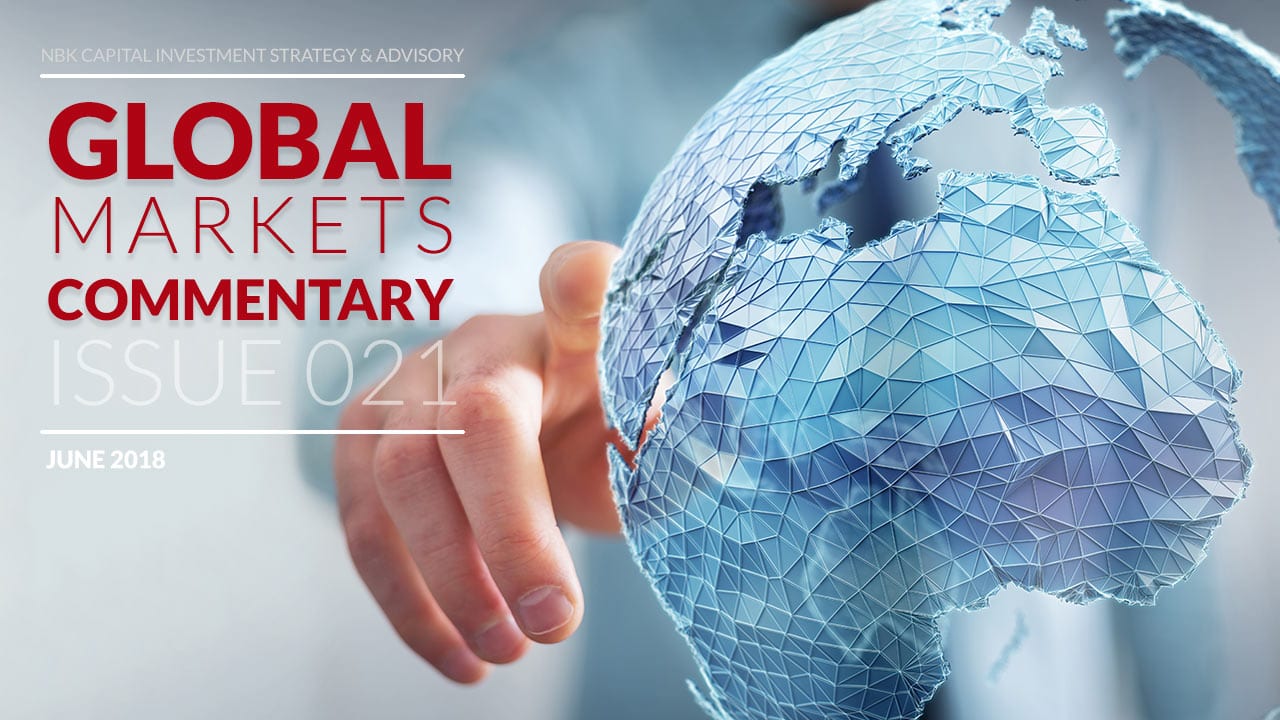 GCC equities ended the month of June in positive territory, up 1.3%, as measured by the S&P GCC Index

Global equities in June continued with negative performance, dropping 0.7%, as measured by the MSCI All Country World Index while Q2 2018 performance is almost flat at -0.1%. In the US, the two major indices had mixed performance with the S&P 500 gaining, for the third month straight, 0.5% while the Dow Jones Index closed down 0.6%. On a quarterly basis, both indices are positive with the S&P 500 and Dow Jones Index up 2.9% and 0.7%, respectively. Trade war talks continue to weigh heavily on market performance. During the month, the G7 met but were unable to find a resolution pertaining to global trade strains. The Federal Reserve hiked its key short-term rate by 25bps, to a target rate range of 1.75-2.00% and signaled a possible additional two hikes by year-end. In terms of the economy, the Markit Manufacturing PMI in June was slightly higher than the previous month at 55.4 vs 54.6, indicating continued growth. The annualized Gross Domestic Product (GDP) for Q1 2018 came in at 2.0% just under the preliminary figure and market expectations.

In Europe, June’s performance as measured by the Stoxx Europe 600 was down 0.8%, yet on a quarterly basis remains up 2.4% given the strong performance back in April. Germany and France’s major indices followed suit with the DAX Index and CAC 40 Index shedding 2.4% and 1.4% although for the quarter were up 1.7% and 3.0%. During the month, US tariffs went into effect on European aluminum and steel forcing the EU to retaliate with tariffs on US products worth an estimated USD3.4 billion. Internally, the EU governments have come to an agreement with Greece delaying repayment of EUR96 billion for an additional ten years in an effort to assist the country in recovering as the bailout program ends in August. On the economic front, the Markit Manufacturing PMI for June came in at 54.9 remaining above the 50 mark. The Consumer Confidence figure dropped to -0.5 from 0.2 in the previous month while the Consumer Price Index year on year increased 2.0% slightly better than May’s reading of 1.9%.

The UK’s FTSE 100 Index in June was unable to maintain its positive momentum from the previous two months closing in the red 0.5%. On a quarterly basis, the Index is a top performer registering gains of 8.2% reversing for the most part the losses sustained in the first quarter of 2018. On the Brexit front, Prime Minister May won a key vote putting a halt to pro-Europe conservatives handing Brexit negotiating power to Parliament that would have more than likely ensured a soft divorce from Europe. During the month, the BOE met and on a split vote of 6-3 held its key policy rate unchanged. In terms of economic news, the Markit Manufacturing PMI was flat for June coming in at 54.4. The Gfk Consumer Confidence in June was -9 dropping 2 points from May’s reading. The GDP year on year Q1 reading came in at 1.2% as per market expectations.

Japan’s Nikkei 225 in June posted a gain of 0.5% registering a Q2 2018 close of positive 4.0%. The BOJ reduced its inflation expectations with the governor stressing his intentions to continue with loose monetary policy. Trade war talks continue to be a major concern with Trump threatening automakers with tariffs. Japan’s government did not use retaliatory language but explained that such a move would hurt the global auto industry and negatively affect Americans. Economically the country remains in a growth mode as the Nikkei Manufacturing PMI in June came in at 53 slightly higher than the previous month’s reading while Consumer Confidence for June remains below 50 at 43.7.

Emerging markets in June continue to bleed posting a loss 4.6% as measured by the MSCI Emerging Market Index. In terms of quarterly performance, the Index in Q2 2018 is down 8.7%. The Index suffered losses on the back of general trade war talks and more so on US rhetoric aimed at China. Sub-markets also suffered during the month. The Shanghai Composite Index shed 8.0% bringing its Q2 performance to -10.1%. South Korea’s KOSPI200 Index suffered a similar fate dropping in June 3.6% with its Q2 performance down 4.8%. During the month, President Trump and North Korean leader Kim Jong Un attended a summit marking a historic moment as no sitting US president has ever met with North Korean leadership. In China, the economic activity remains positive with the Caixin Manufacturing PMI coming in at 51. The Non-Manufacturing PMI in June increased by 0.1 to 55. In South Korea, the Nikkei Markit Manufacturing PMI, remains below 50, although increased by 0.9 to 49.8.

Brent Oil in June closed up 2.4%, marking the fourth straight month of positive returns. On a quarterly basis, the commodity is up 13% while on a YTD basis it is up 18.8%. OPEC along with Russia met in Vienna during the month to discuss potential shortfalls in supply resulting from the Iran nuclear deal falling apart, Venezuelan production issues, and increased demand. The meeting ended with an agreement that countries would in aggregate increase production by almost 1 million barrels per day starting in July. Gold continues to perform poorly, dropping in June 3.5% bringing its Q2 performance to -5.5%.

GCC equities ended the month of June in positive territory, up 1.3%, as measured by the S&P GCC Index. The GCC equity markets benefitted from news of Saudi Arabia’s MSCI upgrade to Emerging Market status and Kuwait’s possible future upgrade in addition to rising oil prices. The best performing index was Bahrain Bourse’s All Share Index for the second consecutive month, up 3.6%, followed by Kuwait up 3.3%, Saudi Arabia up 1.9% and Qatar up 1.6%. The worst performing index was Dubai’s DFM General Index for the second consecutive month, down 4.8%, followed by Abu Dhabi down 1.0% and Oman down 0.8%. MENA equities, as measured by the S&P Pan Arab Composite Index, closed the month in the green 0.7% with Egypt’s EGX 30 registering losses of 0.4%.